The Toy Story movies, aside from being a great way to keep your kids busy for a few hours, can be seen as an in-depth discussion of  faith and religion. You may think that we’re reading too much into it, and you’re absolutely right — that’s what makes the Internet fun. Read on to see if we can convince you!

The Mutant Toys in the first movie live in the house of Sid and Hannah Phillips. Sid is a monstrous young child who steals Hannah’s toys, destroys them and then combines them with parts of other toys to rebuild them. The saga of the Phillips’ toys mirrors an Egyptian myth. The God-King Osiris is tricked by his brother Seth into lying down in a bejeweled coffin. Seth and his cohorts then put the coffin in the Nile, where Osiris subsequently drowns. Osiris’ body is later cut up into pieces. Those pieces have to be put back together by Osiris’ wife, Isis. After Osiris’ body is reconfigured, Osiris is brought back to life with magic.

Many Egyptian myths center around death and the journey to the afterlife. Sid, like Seth, is obsessed with violence and destruction. Sid is often seen wearing a skull on a black t-shirt. Sid’s house is literally a “house of the dead.”

Stinky Pete Is A Cult Leader

Stinky Pete is one of the main characters in Toy Story 2. He appears to be kind and affable until Woody attempts to escape — then his true colors shine through. He exhibits many traits that cult leaders use in order to keep their followers in line. A local Sheriff once referred to David Koresh as a “nice guy.” Jonestown followers were captivated by Jim Jones’public speaking abilities.

Many of Stinky Pete’s darker qualities are shown in his relationship with Jessie. He recruited her to his cause while she was emotionally fragile. Jessie was abandoned by her owner, and Pete keeps Jessie subservient with the constant threat of going “back into storage.” A third of people successfully indoctrinated into cults are recruited after a personal loss. Cults then proceed to isolate and threaten their members to ensure their continuing loyalty. Pete has successfully sequestered Jessie and Bullseye within Al’s Penthouse.

Stinky Pete is also perfectly willing to use sabotage and violence to maintain control. Stinky Pete’s indoctrination even works on Woody. Woody is hesitant to accept the escape plan of Andy’s toys in favor of remaining with the Roundup Gang. At that point, Woody had succumbed to the cult indoctrination and sees the Roundup Gang as his “new family.”

When people think of the The Church of Jesus Christ of Latter Day Saints, they generally associate it with Utah. However, nearly a quarter of the residents of Idaho are practitioners of Mormonism. Idaho is universally identified with the potato. Mr. Potato Head has a fairly antagonistic relationship with Woody, who as you’ll learn later can be seen as a representation of evangelical Christianity, during the first Toy Story. There’s still a significant division between Evangelical Christians and Mormons.

At the end of Toy Story, Mr. Potato Head is “gifted” with Mrs. Potato Head. The practice of an arranged marriage is not endorsed by the Church, but the Fundamentalist Church of Jesus Christ of Latter Day Saints has has been accused of practicing arranged marriages. None of the other relationships in the Toy Story franchise indicate a marriage simply because the relationship was predestined by the toy company. Woody doesn’t have a romantic relationship with Jessie, Barbie helps the other toys conspire against Ken in Toy Story 3. Mr. and Mrs. Potato Head seem to share a common belief system that leads to the union.

The Humans Are An Example of Dystheism

Dystheism is the belief that there is a God, but that God may not necessarily be good or evil. The dystheistic God can range from good to indifferent to completely vile. In the Toy Story universe, the fate of the toys is completely determined by their human owners. Al McWhiggin sees the toys as a means for profit. Emily threw away toys she no longer wanted. Daisy’s parents saw toys like Lotso as being replaceable.

Each of these owners, like Andy, wield absolute power over the fate of the toys. Even though they didn’t make the toys, the relationship is very much like that of a God and its creation. The fate of the creation is dependent on the mood of the God they happen to serve. The toys have little to no choice in their master or the fate of their fellow toys. As a matter of fact, the fates of Bo Peep and Wheezy are completely unknown. The only known element is that their fates were decided by humans.

The unofficial hymn of dystheistic ideals is “He Gives All His Love,” a song from 1971 which portrays a disinterested God looking down at human suffering. The song was written by Randy Newman, who would later work on the Toy Story soundtracks.

Totemism is a belief in kinship or a mystical relationship with a totem — something that’s a symbol for a family or a tribe. A totem can also be a person that represents an idea. Totemism is common among aboriginal populations. In the first Toy Story, the Squeeze Toy Aliens worship “The Claw.” The Claw is just a mechanical hand used as part of the game to grab the Aliens. However, the Aliens have turned the Claw into a totem with which they have a mystical relationship. The Aliens the Claw takes are believed to have been chosen for a better fate.

Lots-‘O-Huggin Bear and the Church of Satan

Contrary to popular belief, the Satanism of Anton LeVay as spelled out in The Satanic Bibleis not the worship of a Biblical Satan. Satan is merely a symbol of their overall theology. The Church of Satan rejects the idea that there is an external divine being, arguing that divinity is a concept which is self-contained in the individual. The values of right and wrong are left up to the determination of the individual deities, a concept that doesn’t leave room for the worship of an external deity.

Lotso believed that he was abandoned and replaced by his external deity. In this case, the external deity was a little girl who owned him. With the lack of an external deity, Lotso reorganized his belief system into one which only recognized himself as a deity. Morality then became determined by Lotso and his new god-like status. Amorality for Lotso then evolved into a sense of chaotic evil. This belief system is best represented by Lotso when he mocks the other toys before attempting to murder them by screaming “Where’s your kid now, Sheriff?” Lotso is mocking the old belief of external deities controlling the toys’ lives. Lotso’s now in favor of his own personal self-determination.

The Toys Existence is a Form of Animism

Animism is the belief that all things possess a soul. It’s the the attribution of conscious life to nature and inanimate objects. English anthropologist Edward Tylor coined the phrase in his 1871 book Primitive Culture. Tylor stated that animism appeared mainly in tribal religions, and he goes on to dismiss the idea as superstition. However, the existence of animism in native cultures may indicate that animistic beliefs are in fact older than many organized religions.

The toys have a soul simply because they exist. They instinctively know how to behave around humans and animals. On some levels, these apparently ancient rules must predate them and possibly even toys in general. It’s possible the toys are the evolution of spirits known as dryads. Dryads were nymphs that lived in trees and were worshiped in Druidic ceremonies. If the tree died, the Dryad living in the tree would also perish. This is one of the earliest known forms of animism. The dryads could have evolved into living in objects made from trees and ultimately into living within the toys. This would make the concept of living toys much older than the age of modern action figures.

Jessie And The “Backsliden Christian”

Jessie is an example of what evangelical Christians would refer to as a “backsliden Christian.” Jessie started out with the same beliefs as Woody and other toys. After her abandonment by Emily, Jessie became “lost” and eventually fell into the cult of Stinky Pete. It’s only when Jessie returns to her core beliefs that she finds safety in Andy’s house. Her continuing belief also allows her to survive to the point where she is finally cared for by Bonnie Anderson, the new owner of Andy’s toys.

The implication isn’t that Jessie was the victim of forces beyond her own control, but that it was Jessie’s own lack of faith and non-adherence to ritual that led her to Al’s Toy Barn. When she found her belief again, Jessie’s life started to turn around. Backsliding, to Evangelical Christians, is when a converted Christian’s lifestyle falls back to a pre-converted state. Jessie was “brought back into the fold” by meeting Woody. In some Christian teachings, backsliding can ultimately result in a loss of the conditional security of salvation.

Buzz Lightyear And The Church Of Scientology

Did you know that one of the major goals of Scientologists is to achieve a “oneness with Infinity?” This “urge toward infinity” has been conveyed with a triangle overlapped with an infinity symbol. Scientology Leader David Miscaviage is quoted as saying “You are missing the signpost up ahead… the one that reads infinity.”

Scientology founder L. Ron Hubbard was an avid science fiction writer, and in a certain context Buzz Lightyear appears to be a walking advertisement for Scientology. Lightyear’s signature catchphrase is “To Infinity and beyond.” His square jaw and features appear to be a caricature of Hubbard. Lightyear also believes that visualizing having a power is equivalent to actually having that power. This theory is most evident in Lightyear’s belief that he can fly. Scientologists use guided imagery and visualization to attempt to connect with the higher being within themselves. Buzz Lightyear appears to apply Scientology principles throughout the trilogy.

Sheriff Woody is Andy’s favorite toy. Woody’s very name is evocative of the wooden Christian cross. Furthermore, Sheriff Woody is a symbol of the American West in the nineteenth century. The time frame that Woody represents is the time of tent revivals, a period where many evangelical Christians were crusading to revive the country’s spirituality.

Throughout the movies, Woody is also a study in a belief system that receives many challenges. Woody believes that Andy will always be there for him. At the beginning of the first Toy Story, Woody has never experienced anything which would challenge that belief. Woody’s faith is tested by the arrival of Buzz Lightyear, as well as the incident at Al’s Toy Barn. But Woody keeps coming back to his faith even through its challenges. Woody also converts Jessie, and almost sacrifices himself for the other toys. Woody’s beliefs are not shared by all of the other toys. Woody frequently clashes with other toys, even though Woody appears to be their elected leader. Throughout the movies, Woody learns to trustthat there is a higher power and plan for him even beyond his time with Andy. That belief is one of the hallmarks of the Christian faith. 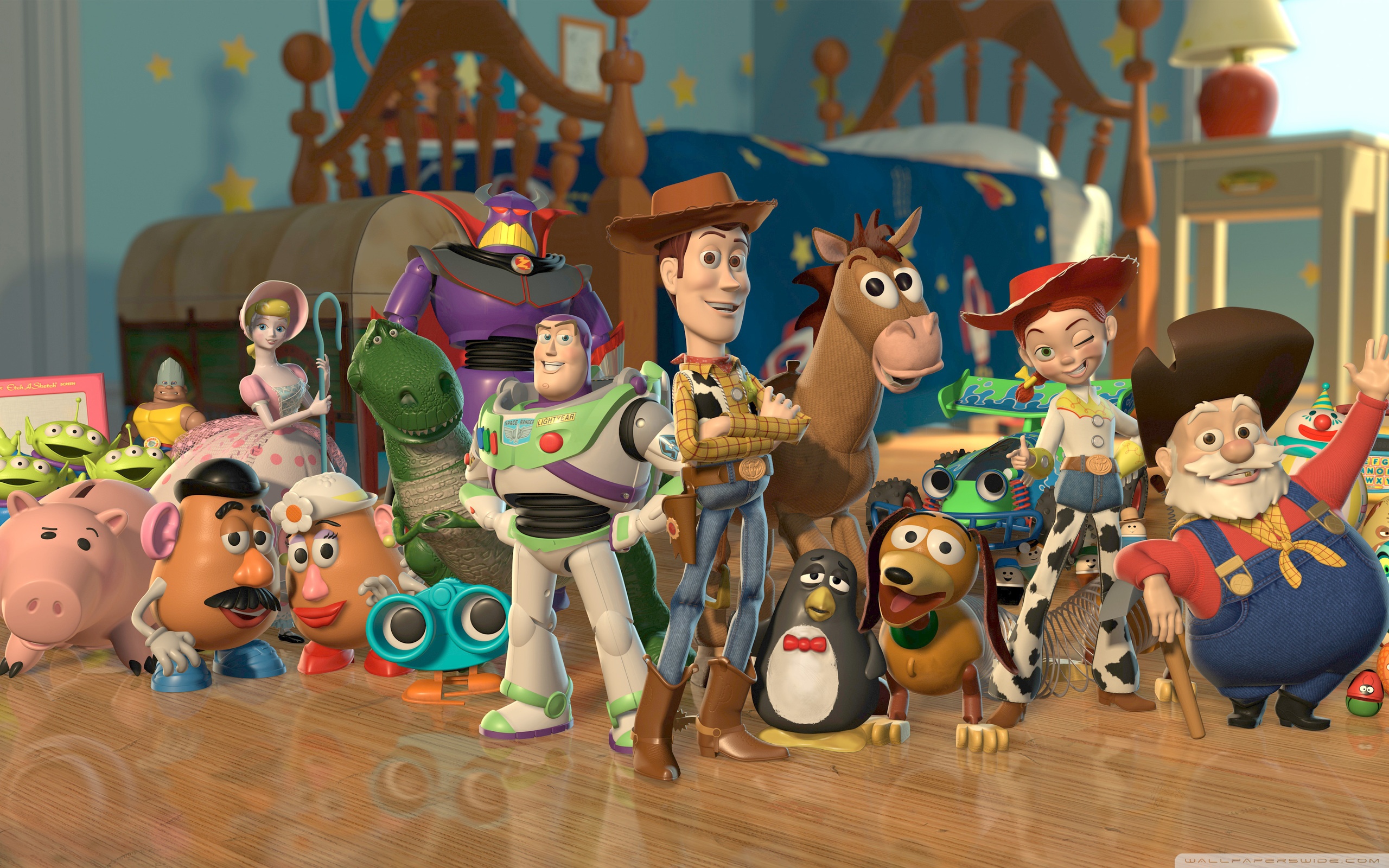